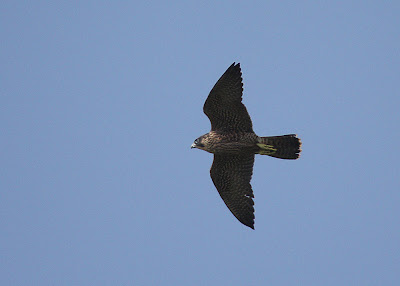 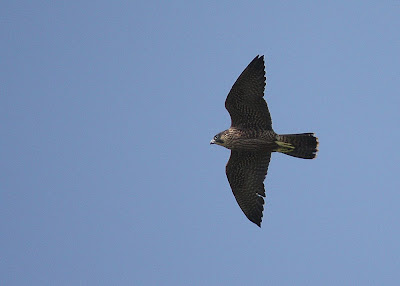 I had thirty minutes looking for sight of the Peregrines on Friday, at first I did not see them but then saw one bird high up on a rock preening. After viewing in the scope I got the camera and it immediately set off in flight, went away from me and then two birds appeared. I manged a couple of shots before the birds disappeared.
After waiting ten minutes I was putting the gear back in the car when they flew directly overhead. That would have been the shot. I hope to return soon.
Posted by Mike Randall Bird Photography at 21:06

Well done for capturing the Peregrine in flight.

Thanks Chris they are great birds to see at anytime. We are blessed in this area.

Thanks very much Lyn & Roy

Campaigning for the better

Welcome to my Blog Site dedicated to the natural world. I hope that you enjoy looking at the pictures I have posted. The site is updated as soon as I have decent new pictures to show or perhaps a record shot (the best shots I have obtained of something a bit rarer).

Please look at the archieved pictures by clicking the Blog Archieve link below. The number in brackets is the number of posts made in the period.

By left clicking and F11 on each picture you will get a larger picture displayed. F11 to get yout tool bar back!

All pictures are Copyright of Mike Randall.

Mike Randall Bird Photography
West Ayton, Scarborough, N Yorkshire, United Kingdom
Welcome to my blogsite where I aim to showcase the birds and other wildlife encounters I have. I am based in Scarborough, N Yorkshire and I hope to show some of the area and its wildlife. My picture are mostly taken on walks and visits to reserves with my wife Pat. You will always find better pictures from some of the fantastic bird photographers out there who may put in hours for just that shot but I aim to get the best captures I can possibly obtain. This blog is to shgare my pictures and I aim to post whenever I can. I hope you enjoy the visit, please do leave a comment, good or bad, I will always try to reply.

LINKS TO OTHER SITES